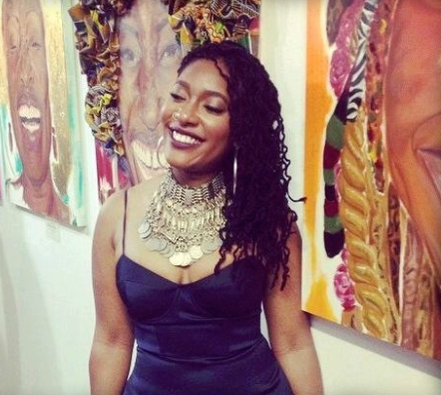 “I build my art making process by allowing myself to view the world that I live in critically and as a malleable aesthetic experience.  At an early age I developed a very strong sense of self and culture from work that surrounded me in my home, which referenced the African American experience.  These images undoubtedly embedded itself in my personhood, thus encouraging me to embrace an Afrocentric perspective on identity, world-views, morality and aesthetics. As a result, I’ve chose to focus on the African American figure as my subject.”-Imani Shanklin Roberts

Imani Shanklin Roberts is a Washington, DC native currently based in New York. Roberts earned a BFA/MS in Art Education upon graduating from Pratt Institute in 2014. As an artist and enthused educator who peels apart topics on race, gender, and identity, she seeks to create and facilitate socially responsive work that encourages ideas of self-realized liberation. Using the traditional mediums of oil paint on canvas, she has entered the arts realm once dominated by a ruling minority to express the language of the oppressed and unheard. She draws inspiration from African American artists that have visually explored identity using figures and identifiable color choices in her work to reflect how she experiences the world.

Roberts is currently exhibiting at Weeksville Heritage Center in her solo exhibition, I AM SHE with collaborating artist Alicia Delarge. Her most recent public project is her execution in creating a Mural in conjunction with South African Tourism x CitiBike, dedicated to world renowned artist, Esther Mahlangu in Manhattan, New York. Roberts has coordinated Five solo exhibitions, most recently “Pan-Washingtoninan”, and has exhibited in various spaces including The Anacostia Arts Center, Weeksville Heritage Center, Blue Door Art Gallery, Busboy’s & Poets, Karrot and the eco-eatery and community gathering space, Habana Outpost. The Brooklyn community has also gotten a glimpse of the artist’s work in three recent shows: After Afropolitan, Out of Bounds: Freedom of Expression, and Myrtle Avenue Brooklyn Partnerships Black Artstory Month. Huffington Post recently recognized her as a “Rising Art Star” and CBS DC honored her as one of the “Best Up-and-Coming Artists in DC” in 2012. Roberts’ distinct aesthetic empowers her viewers to deconstruct limitations and think beyond while embracing their cultural identities.