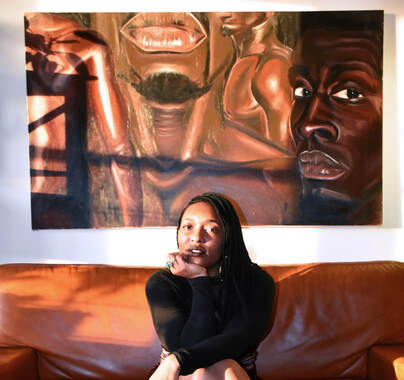 ​Imani Shanklin Roberts is a Washington, DC native who recently returned to DC after ten years of residing in Brooklyn, NY. Roberts is currently earning a MPS in Creative Arts Therapy and holds a BFA/MS in Art Education from Pratt Institute. As an artist and enthused educator who peels apart topics on race, gender, and identity, she seeks to create and facilitate socially responsive work that encourages ideas of self-realized liberation. Using the traditional mediums of oil paint on canvas, she has entered the realm of the arts once dominated by a ruling minority to express the language of the oppressed and unheard. She draws inspiration from African American artists that have visually explored identity using figures and identifiable color choices in her work to reflect how she experiences the world.

Roberts most recently screened and exhibited her debut Film, TalkToHIM, in collaboration with artist Raya Kassisieh, the Culture LP, and the Museum of Contemporary African Diasporan Arts (MoCADA). Roberts executed a mural for Woodhull Hospital as a selected artist by  New York Health and Hospitals Arts and Medicine Community Mural Project. Roberts has been noted for her creation in the design and sculpture Lena Horne Prize which is noted to be “which is billed as the first major entertainment award to be named after a woman of color”. Roberts has also been selected for the first Black Lives Matter Street Mural in the Bronx, New York. An esteemed commission of Nelson Mandela by the Nelson Mandela Foundation and a Mural in conjunction with South African Tourism x CitiBike, dedicated to the world-renowned artist, Esther Mahlangu in the TriBeCa neighborhood of Manhattan, New York. Roberts has coordinated Six solo exhibitions, most recently “I AM SHE”, and has exhibited in various spaces including Weeksville Heritage Center, The Anacostia Arts Center, Blue Door Art Gallery, Busboy’s & Poets, Karrot and the eco-eatery and community gathering space, Habana Outpost. The Brooklyn community has also gotten a glimpse of the artist’s work in three recent shows: After Afropolitan, Out of Bounds: Freedom of Expression, and Myrtle Avenue Brooklyn Partnerships Black Artstory Month. Huffington Post recognized her as a “Rising Art Star” and she has been featured in AfroPunk, Artnet, Essence and several other global and nationally acclaimed platforms. Roberts’ distinct aesthetic empowers her viewers to deconstruct limitations and think beyond while embracing their cultural identities.